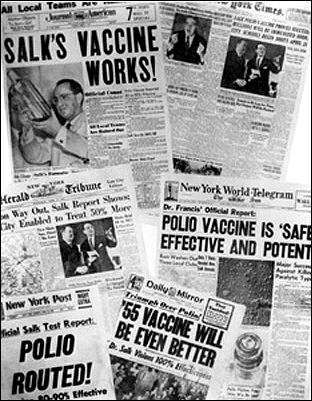 Many Americans today no longer trust science; they would rather believe internet conspiracies that vaccinations cause autism than believe the numerous scientific studies that have found no link at all between vaccination and this condition in children. And now, in an epidemic of the H1N1 virus (swine flu) that is particularly virulent in children, they won’t get their children vaccinated.

How different is the lack of trust in science today from the time when vaccination was still in its infancy. Dr. Jonas Salk (1914-1995) was the virologist famous for discovering and creating the safe and effective polio vaccine that eradicated that disease in children. Until 1955, when Salk introduced the “polio shot,” polio in children was considered the greatest public health danger. There were upwards of 300,000 cases a year, and 58,000 deaths, most of them children.

When the news was broadcast that Salk had created a polio vaccine, church bells started ringing across the country, factories stopped for moments of silence, synagogues and churches held prayer meetings, and parents and teachers cried with relief and joy. Salk was hailed as a “miracle worker” and parents rushed to get their kids vaccinated.

I remember all this quite vividly, even as I remember standing in a long line with my mother, waiting to be among the first kids vaccinated. My mother cried “Thank God! Thank God! when I received the vaccination.

This is the result. The undermining of trust in scientific method has led to parents now refusing to have their kids vaccinated for H1N1–putting their own kids’ very lives at risk, let alone the lives of other children and vulnerable adults from unvaccinated kids spreading the disease.

And yes, I think it’s immoral not to get your kids vaccinated, both for their own sake and the sake of the health of the whole community. Suppose parents in the 1950’s had had this current attitude about the polio vaccine and refused to get their kids vaccinated? Then polio would still be killing and maiming kids and adults. Which do you think was the better moral choice?

Instead, we see that larger and larger percentages of the American people scarcely even understand scientific method any more. They have been led to believe, by the constant drum-beat of conservative rhetoric, that modern science is a hodge-podge of unsubstantiated claims. So why would they choose to believe the science of the Centers for Disease Control over the numerous “blog spot” websites that claim vaccinations are dangerous for children. Just Google “vaccinations are dangerous for children” yourself and browse through the conspiracy wilderness. I will not dignify them by posting the links.

Where is the trust my parents had in Dr. Salk? It is no more, replaced by religious fear-mongering about science and aided by the lack of basic science education in our schools.

But there’s one more thing about Dr. Salk from which scientists today could learn as they try to rebuild the public trust in science. Dr. Salk became a hero to the American public because he refused to patent the polio vaccine for his own personal profit. He said he wanted to see it disseminated as quickly and as widely as possible and patenting would have hampered this. When asked who owned the patent, Salk replied: “There is no patent. Could you patent the sun?”

Today, scientists even patent segments of the Human Genome and these patents retard research as others have to pay to work on those sequences of the human body’s basic chemical code.

Lack of trust is a two-way street. Between the religious conservatives on the right undermining trust in science, and for-profit science not doing a lot to earn our trust, we are in a bad way.

And unvaccinated kids and vulnerable adults are put at risk because of it. This is truly shameful and immoral.