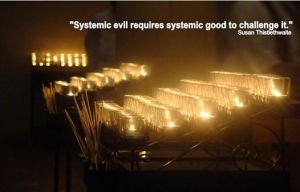 In the Spring of 2016 I have proposed a new online class at Chicago Theological Seminary, TEC 426, called the “Violence and Nonviolence Seminar.”  This is the description:

This seminar will address multiple forms of escalating violence in the U.S. and global contexts, and explore practices of nonviolence to address these systemically. Students will work in small groups to collaborate on a draft US Kairos Document as a class project, engaging in a public commentary process to receive feedback and do revisions.

I got the idea for a seminar that would take up writing a draft US Kairos document in thinking about the US context and  escalating violence, particularly white supremacist violence.  A column for the Huffington Post called A Break in Time: 5 Ways White Christian Theology Needs to Change After Charleston produced, as you can imagine, all kinds of feedback.

Now, here’s my current crowd sourced question:  When we study the Kairos documents that have been produced over the last 30 years, and particularly the South African one, we see that the process is one where the draft document was submitted for commentary to key public constituencies as the work went on.  So how do we do a seminar and write a draft Kairos document even as classwork and not include public engagement?

My idea, and one where I would like your feedback, is to create a WordPress public site and as each small group of students completes a section of of draft Kairos document, that group would first put it up internally, on the online class website for their colleagues commentary (and mine!), and then publish it on the WordPress site, soliciting commentary and feedback.  Then, each section would be revised, and republished and so on.  The ultimate outcome would be a process document that would not pretend to be the US Kairos document, but a demonstration of one process toward one such engagement with our times.

What do you think?  This is rather like my “Public Theology” class where students create their own blogs in the public square and receive commentary from their class colleagues, from me, and from the general public.

But, it is also edgier.  We can filter the comments on a WordPress site.  I do that here. Yet, the issues we must take up can be so demonized that it is really hard. Of course, learning to handle such pushback is a crucial skill for the kinds of transformational ministries in which CTS graduates routinely engage. This is also an elective, not a required course.

Yet, we must also remember, this class will be going on during the spring of 2016, where rhetoric on race, sex, gender, economics, faith and justice will be far more over the top than it is now.  Isn’t that, though, exactly when we see a Kairos moment?

I also thought you’d like to see the draft reading list to date.  Suggestions for reading beyond this list are also welcome.  There are also several articles and online documents I have not listed here:

Glen Stassen, ed., Just Peacemaking: The New Paradigm for the Ethics of Peace and War, Pilgrim, 2008

Just comment as you see fit and we’ll take this idea out for a test drive. Thanks. Susan

2 thoughts on “Crowdsourcing the “Violence and Nonviolence Seminar””